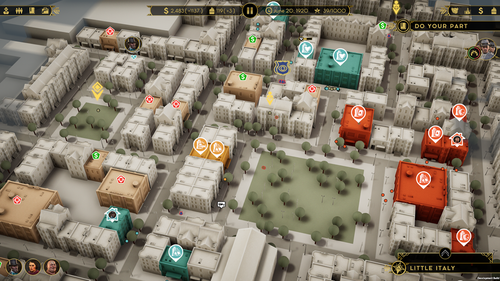 There are ten neighborhoods around Chicago from which you can build your empire of sin. You will start the game in any one of these neighborhoods and begin wheeling and dealing from there.

Each neighborhood has its own unique bonuses that affect your rackets in that neighborhood.

Build yourself a nice neighborhood racket and as sure as you’ll have customers, you’ll have rivals coming to raid or attack your place of business. Every cloud has a silver lining though, each raid is a chance to build the resilience of your racket and its people. 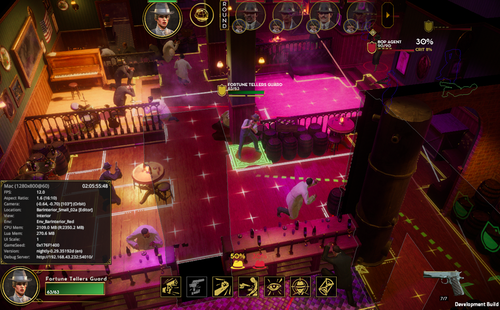 The Badass bonus means that for every raid you fight off, those defending your racket become more resilient to both raids by other gangs, and law enforcement. After fighting off one raid, your guard decides they need a shotgun. After surviving five, they’ve moved onto live explosive rounds.

Synergies are a neighborhood specific bonus that grant you bonuses for having certain combinations of rackets. These bonuses increase revenues for those rackets by a certain percentage. They are based on poker hands:

A Hotel in a neighborhood will double your synergy bonuses. Rackets can only count towards one synergy at a time, therefore, the minimum amount of rackets in order to have all synergies active is 23, and they need to be acquired in the desired order to maximize the synergies.

Before you think about stamping your boot on any old turf, it’s probably a good idea to know what you’re getting yourself in for. To find out which neighborhoods will fold to your rule easiest, so to speak. Zooming out a few clicks on the World Map will bring up a small profile on each neighborhood. From here you can see the following: 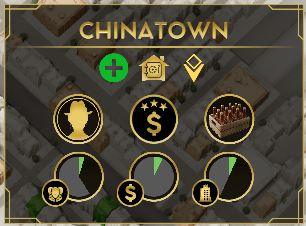 Each neighborhood is more colourful and diverse than the last. Locals have different preferences and interests, be it gambling, drinking, or they may be loose or tight with their cash, depending on the establishment. The green plus icon shows you the different bonuses that can be gained from venturing into a specific neighborhood. It may be cheaper to open a casino in one neighborhood, but there may be a better spending average in another.

This icon lets you know if there are any active points of interest in this neighborhood. These can represent mission goals and NPCs that want to talk to you.

The neighborhood owner shows who the biggest fish in the neighborhood is. If there is none, that means the spot is up for grabs. Although, the same can be said if there is a local Kingpin and you’ve got ambition. Better get shooting.

Pretty simply, this shows how affluent or run down a neighborhood is. Prosperity will affect the number of customers you get into your rackets. The more prosperous the neighborhood, the higher the average spend of a customer is. There are five levels to a neighborhood's prosperity and each level has a preferred alcohol type from swill all the way to whisky. When a neighborhood moves up a prosperity level you will be notified and for a period of one month, you have the bonus of supplying both the old and new types of alcohol to your customers.

This shows the type of liquor that is preferred in a given neighborhood, be it swill, rack or premium. This is directly influenced by the prosperity of the area. The better you can cater for the preferred choice of the customers in the neighborhood, the better your chances of them filling out your rackets.

This shows how earnings are being divided up between you and your competitors. Given that your share is again shown in green, the more you see the better.

Shows how many of the rackets in this part of the city are yours, your competitors, and how many are up for grabs.

Some neighborhoods receive nicknames based on how the civilians perceive the activities going on inside them. As a result, a neighborhood can become Red light districts, Gambling Strips, Nightlife areas, or even Murder Mile, if things get a little too out of control. These have an effect on how the neighborhood will evolve, as well.

Wherever there's thugs in a neighborhood, there's usually goodies as well. Not the usual scrap, they are valuable stashes, left behind by no one other but Big Jim Colosimo! The more thugs the merrier the loot, with large gangs guarding some legendary dead drops that give you a real advantage besides the usual items and weapons:

Black Book: You can now hire any gangster you can afford.

Cassiday Connection:: Law enforcement now have a higher opinion of you.

Real McCoy: You find 500 barrels of Whisky - make sure to have enough space to stockpile it!

Rolling Rollino: All rackets you currently own will have their security upgraded by +1 level.

Each stash box is color coded depending on it's rarity starting from Green and going until Orange.