These can be increased through production upgrades or by the effect of a synergy. Synergies are explained in detail in the Neighborhoods section.

Any surplus alcohol will be stored in your Breweries - their storage capacity is determined by their size and Storage upgrade level. A brewery will stop producing when it reaches this storage limit. Managing your Alcohol is discussed in more detail in the Economics section.

If you’re in good standing with other factions you can walk in and poison their alcohol supply. They will accuse you when they find out but if you’re a smooth talker you might be able to pin it on someone else.

Speakeasies are represented by two beer bottles on the map. Everybody’s looking for a drinkin’ hole in a dry town, and you're happy to oblige them. Speaks are where all that hard-won hooch is gonna end up being sold. Speakeasies are very profitable, but require a constant stream of alcohol to make any money. Unlike casinos or brothels, running out of hooch won't just harm your profits, it’ll stop you making any entirely.

Casinos are represented by a deck of cards on the map. Casinos have a high-rate of profit, too, but their income can be unpredictable. Some lucky Joe can win big in any given month, lowering your income. By the same token, your income can be much higher than usual.

Brothels are represented by a heart icon on the map. Brothels are cheap, reliable, and don’t require any alcohol to function. They can be an easy source of revenue for a criminal empire trying to get on its feet.

Hotels will be the only legitimate business you run, but they don’t bring in any money - only crime pays. You want hotels to increase the number of customers in your neighborhoods. The more customers there are, the more of them you can pack into your rackets. Hotels will also increase the benefit from any combination bonuses you have - bonuses granted for having different combinations of rackets in a neighborhood.

Safehouses are represented with a house icon with the picture of their owner in the middle. A Safehouse is a useful stronghold to have in a neighborhood. You will start out a new game with one, and can build additional ones in other neighborhoods. Safehouses are equipped with small breweries, but otherwise do not generate profit. A Boss can be assigned to your starting Safehouse, and a Lieutenant can be assigned to a Safehouse built in other neighborhoods. If someone is assigned to a Safehouse, they can’t take part in combat or other actions, but you gain increased Loyalty gain for all Gangsters in that neighborhood, increased Draw to your rackets, and additional guards in your Safehouse.

To assign a boss or underboss to a Safehouse, move them inside the Safehouse and click on the desk. Choose the Assign option. 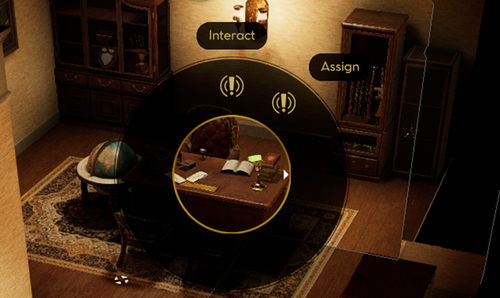 The next screen will show you the benefits for assigning the chosen character. Click “Assign” to confirm the action. The assigned character will be shown sitting at the desk, and will not be usable for any other action until unassigned. 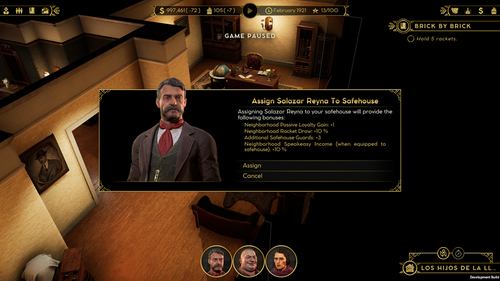 Note: When you open a safehouse in a remote neighborhood you are asked to assign a lieutenant. At the moment you have to pick a Made gangster from your crew, but you can also back out of it and keep the safehouse. You can assign a lieutenant to it, or even swap the one you had picked earlier. The current way to do it is to go inside the safehouse, select only the gangster you want to assign and right-click on the desk. One of the options will be "Assign".

There are three primary ways to take over a racket: if you have the cash, you can buy an empty building and turn it into a racket of your choice. If you don’t want to spend your hard earned dough, you can directly attack another boss or minor faction’s racket, or a Derelict Building occupied by Thugs. Lastly, killing another major faction’s boss will give you all the rackets in their empire immediately. 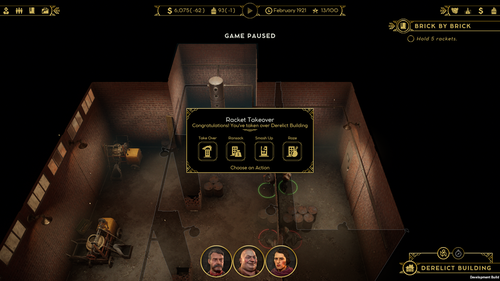 If you are successful in your attack, you can Take Over, Ransack, Smash Up, or Raze the building. Ransack loots the building and renders it unusable by any faction for a short amount of time, while Razing makes the building unusable permanently. 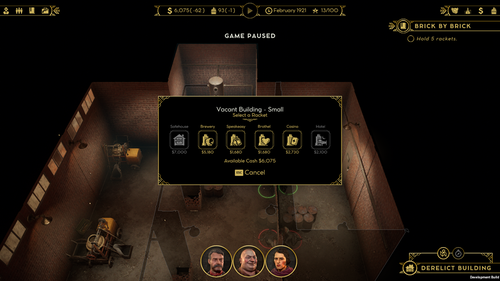 Now that you’ve got your racket, you want it to start pumping out as much hooch or money as possible. Rackets can be upgraded in the following ways: 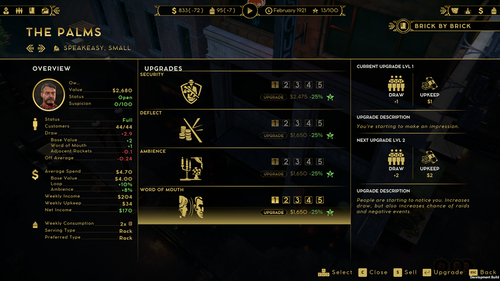 To upgrade a racket, go to the racket overview screen by clicking on the racket from the street view, by locating the racket in Empire Overview, Finance Info, or Alcohol Info screens, or by clicking the racket icon in the bottom left of the screen while in the racket itself. Click upgrade to spend the money on the upgrade of your choice. Each upgrade will take a certain amount of in-game time - you can Rush this waiting time, therefore skipping it entirely, by spending an amount equal to half of the price of the upgrade.