You’re going to find many bits and pieces during your time in Chicago. Whether it's from a building you ransack, or the pockets of someone you’ve just killed, there’s more to be found than just money and guns. Here are some of the items floating around the streets of Chicago.

Weapons and items can be viewed and equipped from the inventory tab of the character sheet. Mousing over (or highlighting on the controller) the inventory slots will show you the equipped items stats. 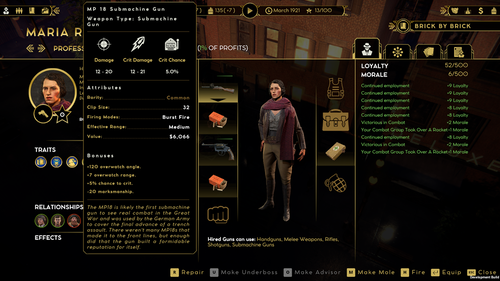 Clicking into the item will show you a list of items you have obtained that can be equipped in that slot. To equip the weapon, click it and select ‘Take from Storage’. If a weapon is already in use by another gangster in your crew, their face will appear beside it, like Gibby’s handsome mug in the picture below. 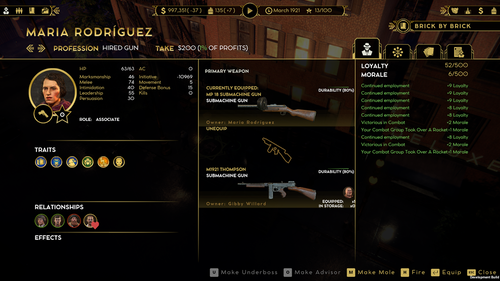 Equipping your gangsters with the right tools for the job is invaluable. There are a variety of weapons and items available for use in combat in Empire of Sin, which can have six types of rarity, ranging from Common to Legendary. Most importantly, there are six variety of fire-arms, each with their own strengths and limitations: