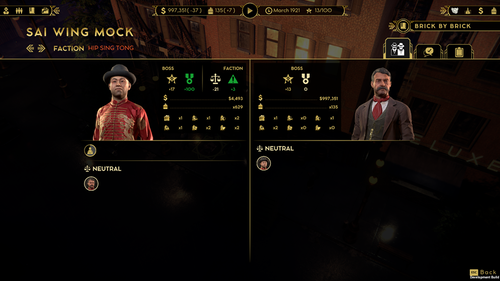 It’s only a matter of time once you start exploring Chicago before you run into a rival faction. It’d be great if you could just blow away all the competition, but sometimes you have to play nice when dealing with others. There are a lot of benefits to keeping your rivals on your good side, from trading to alliances.

All of your interactions with rival factions are managed from the Diplomacy Screen. This screen also shows how each gang you’ve encountered feels about you. You can also see how many rackets your rivals hold, as well as how much cash they have. An important piece of information available on the Diplomacy screen is the Agenda: you can see what your rivals are currently focusing on. Knowing what your potential enemies are up to is useful when trying to move against them. 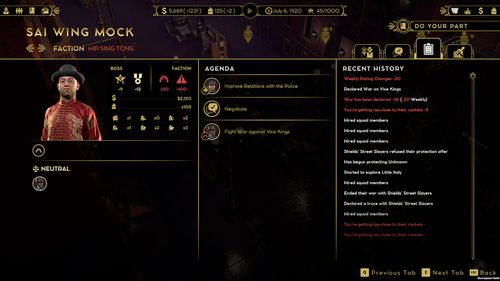 Faction Rating is a basic measure of how another gang feels about you, running from -500 to 500. You’ll start off on zero with most factions, except for gangs run by bosses who have the same personality type or heritage as you. Otherwise, faction rating is impacted by a variety of actions - starting up new rackets, doing favours, going to war. Everyone will have an opinion on almost everything you do, for better or worse. Your rating with a faction will affect how successful you are at performing diplomatic actions with them, such as asking to trade or forming an alliance.

Threat is a measure of how big a danger another gang perceives you to be. It is affected by the size of your empire, how close your rackets are to theirs, how many gangsters you have hired, and any violent actions you take.

You can also monitor how well your gang is ranking overall, compared to the other gangs operating around Chicago. 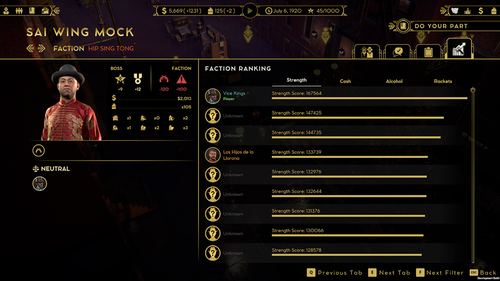 The rankings are split into different categories that cover most aspects of running a criminal empire in the Windy City. They are:

These numbers may appear to be insignificant at a glance, but they can help you keep a close eye on how well you’re competing with other gangs, and can be a good insight into what areas you may want to improve, so that you don’t lose your foothold to another gang. 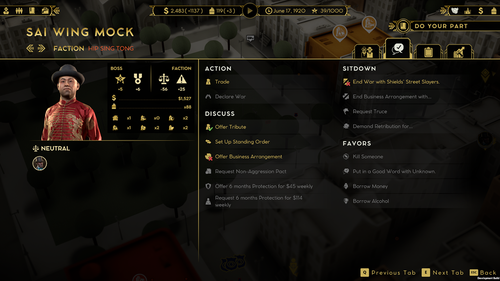 You can request a sit-down with a boss to discuss various options. Upon encountering a faction (minor factions don’t have bosses) for the first time, you will have the option of having an initial sit-down. This will allow you to get to know them a little, as well as decide if you want to tentatively work with them, or refuse. 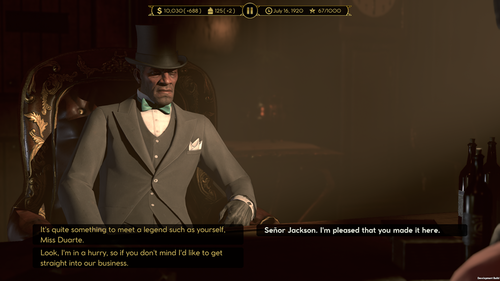 After this, you can request a sitdown with them to end a war or a business arrangement with another faction, to request a truce if you are at war, or to demand retribution for an action they have taken against you.

Outside of sitdowns, you can discuss things with a rival boss directly from the Diplomacy screen. 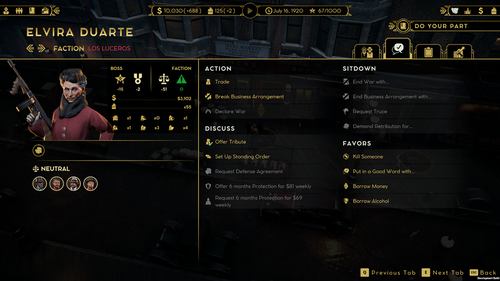 This gives you several options:

You can ask for a variety of favors. Other bosses will only give favors to you if you have entered into a business relationship. You can ask for, or be asked for by another boss, for the following:

Trading with other factions is also handled through the Diplomacy screen. After selecting Trade, you will be able to make an offer of items or cash from your inventory, and ask for items from the rival faction's inventory.

You will be able to see if the other boss will accept your offer and the reasons affecting their decision making: your honor, your reputation with them, and your threat level. 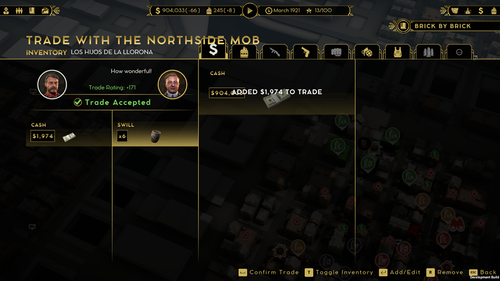 There is also an opportunity for some subterfuge: while trading alcohol, you are able to attempt to disguise your alcohol as a higher grade of booze. The average standard prices for alcohol are: 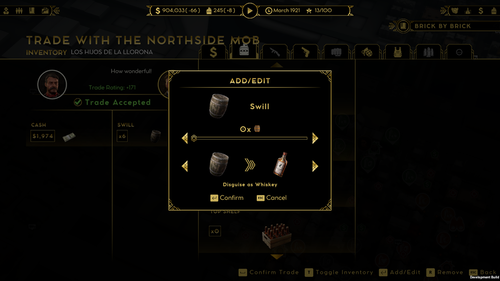 When it comes to diplomacy, the cops are just another gang you gotta deal with. While you cannot declare war or request a sitdown with the police, you can discuss things in much the same way you can with other factions. The police have their own unique options available to discuss: 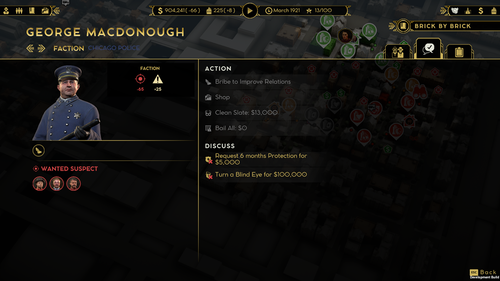 When you think you have the muscle to take out an enemy faction completely, you can declare war. This is done under the Action heading of the Diplomacy screen.

When declaring war, you will be given a success chance rating as well as the option to invite any allies to join you, as well as seeing what allies will join your enemy. Your success chance is based on your relative faction ranking compared to the faction you are attacking. This chance has an impact on whether or not allies will accept your invitation to war. A variety of other factors will determine if another faction will want to enter your war: their opinion of the target, the target’s strength, your honor rating, and your faction rating with the invited faction. When war is declared, all members of the enemy faction will be hostile to you, and their rackets will only be able to be entered when attacked. War’s end when a truce is declared, or when the opposing boss is killed. 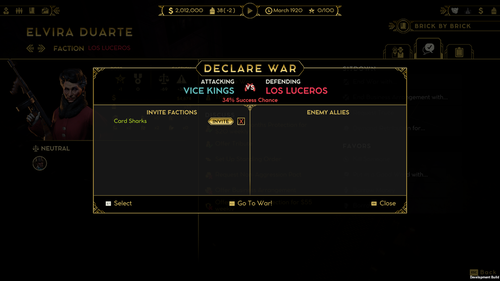 A gangster can be sent to be a mole in a rival gang. This is done by going to their character sheet and selecting “Make Mole” at the bottom of the screen. You will be given an option of which gang to send them to, and their percentage chance of completing their given task. The task the mole will be sent to complete will be based on the gangster profession. 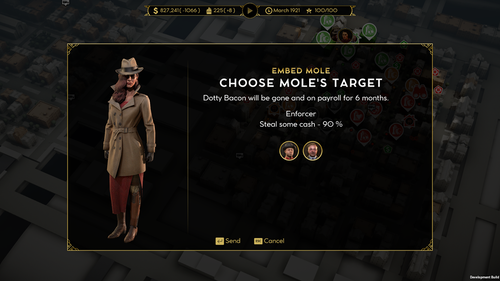 Below is a list of the different tasks each profession carries out as mole:

The higher a gangster tier, the better chance they will have of being a successful mole. If your mole is unsuccessful, there is a chance that they will be caught and killed by the targeted faction.

Keeping things friendly between a bunch of hot-headed, power-hungry gangsters ain’t easy. But I’ve been in this town a long time - I know how to get by without too much trouble. At least til you’re ready to start some trouble, anyway. Here’s a few tips on being diplomatic with your rivals: