Missions are an integral part of Empire Of Sin. They are an opportunity for you to make some extra money, find some new business ventures, gain loyalty, weapons, gangsters for hire, trust from other factions, or at the very least, they are a chance for you to meet some of the colorful locals around the streets of Chicago. Missions vary in length and complexity and can be one-off side missions or follow a story-driven narrative. They fall into different categories as follows:

With so many different types of mission available to embark on, you may be wondering how you can keep track of them all. That’s where your mission journal comes in. All missions are logged through your journal at the top right of your screen. 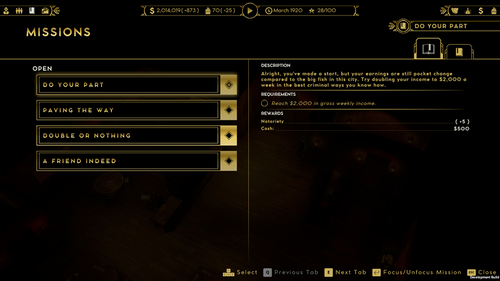 On the left you’ll see open missions and their titles, which you can Focus or Unfocus on by clicking them. Sub-missions will appear under the main title as you progress through the mission. Toggling the parent mission will always show the sub-mission as the main objective. Clicking the sub-mission will show objectives at a more granular level.

On the right you’ll see the mission description, the principal objectives as they unfold, as well as any possible rewards for successfully completing a mission. As objectives are completed they are marked with a green checkmark. The Closed missions tab will show you all the missions you have completed so far.

When you are on an active mission, a yellow mission marker (a diamond above an arrow pointing down) will appear above the destination you need to reach. This marker is also visible from the world map, and can lead you where you need to go, if you find yourself on the opposite end of town to your destination.

Available missions will also be visible from the World Map so you can see at a glance how many missions are available to you. 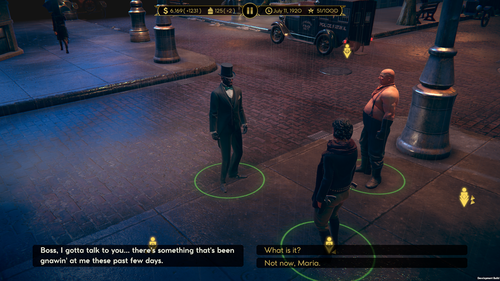 Everybody comes to Chicago with a story, and the fourteen bosses in Empire Of Sin are no different. Each boss has a personal mission that triggers at the start of the game through your initial sitdown. They can be anything from a boss dealing with ghosts from the past, or jumping straight into Chicago’s deep end on arrival, to really make their mark on the city.

These personal storylines are a chance for you to get to know each character a little better, as well as shape the type of boss you want them to be, through different choices presented to you during these missions. Given that you're a busy mobster with an empire to build, these personal missions can be completed at your leisure, whenever you get the time.

Employ an eclectic and diverse roster of dogsbodies, and you’ll soon find that gangsters are fighting their own battles as well as yours. Once certain gangsters have worked for you long enough to build up some loyalty to your cause, they may come to you looking for help in some personal story of their own.

How you decide to handle them can determine the fate of the gangster, as well as certain traits that they may pick up as a result. You also have the choice to let them handle their problem alone, but be warned a gang member who feels undervalued may lose loyalty towards you. Being the boss really is a full time job.

There’s more to running your empire than just the nuts and bolts of good business. Your rackets are a central part of your entire empire and are in need of constant upkeep and change.

Empire based missions could have you working to upgrade your rackets, acquire new rackets for further expansion, or missions based in a specific racket type. It’s good to vary your racket types to make the most of these missions.

This being prohibition Chicago, there are of course missions based around the procurement, production and trade of alcohol. 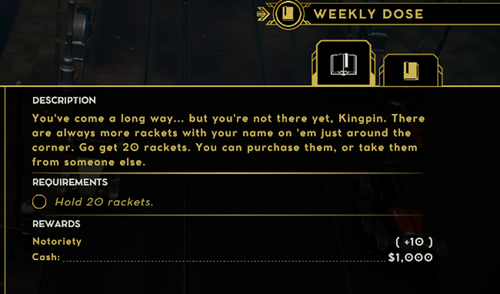 Whether it’s working with your own gang or teaming up with others, these missions are a good way for you to learn the real ins and outs of the bootleg booze industry. And boy is there much to learn and take advantage of.

The city of Chicago is a bustling, thriving metropolis. The faces and places of the city provide business ventures and money making opportunities everywhere. 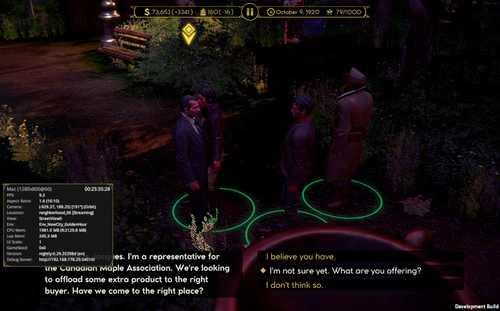 Whether it’s your bartender letting you know what he’s overheard at work, or some back alley go-getter who wants to cut you in on the deal of a lifetime, you’re never stuck for something to occupy your downtime on these streets. Just be sure you know what you’re getting yourself in for.